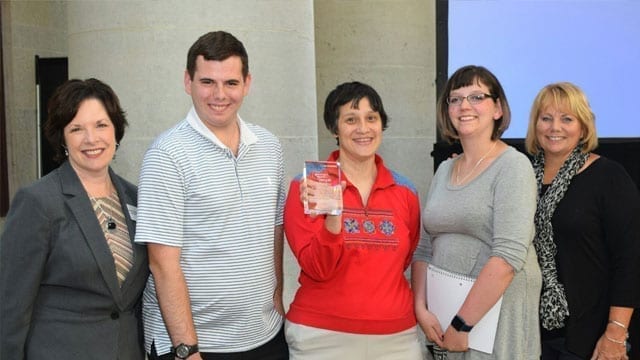 Congratulations to Speak Up for winning the Advocacy Award from the Governor’s Council on People with Disabilities! Pictured: Superintendent Lisa Guliano, Self Advocates Nick Sopiwnik, Elizabeth Crehan and Morgan Gattermeyer, and Community Connections Coordinator Connie Mehlman.

Speak Up is a group of self-advocates from Butler County. In 2016, the group began creating videos called “Just Right.” Each two-minute video highlights one of the 24 rights of people with disabilities and helps people to understand their rights and responsibilities as citizens. The videos are a fun way to learn about rights.

For example, in the Right to Timely Medical Care, a patient has been waiting for medical care for years. In comes Mr. Right to save the day, explaining that the patient has the right to go to the doctor when she needs to. Miss Responsibility comes in and reminds the patient to tell someone when she is not feeling well.

The videos are written, directed and produced by members of Speak Up, with assistance from staff at Butler County Board of Developmental Disabilities. Not only do the videos teach about rights, but also raise public awareness about disabilities. Many of the videos have included members of the community and are filmed in the community.

The videos could be utilized by other groups as a teaching tool and are available on YouTube. The group plans to eventually make videos for all 24 rights.

Morgan Gattermeyer, Co-Leader of Speak Up, said, “Our Just Right videos not only teach us but remind us of the things we are capable of doing.”