The Butler County Board of Developmental Disabilities is no longer accepting referrals for Family Support Service Funding (FSS). The funds for FSS have been exhausted and referrals will not resume until Monday, January 2, 2023. Click here to learn more. 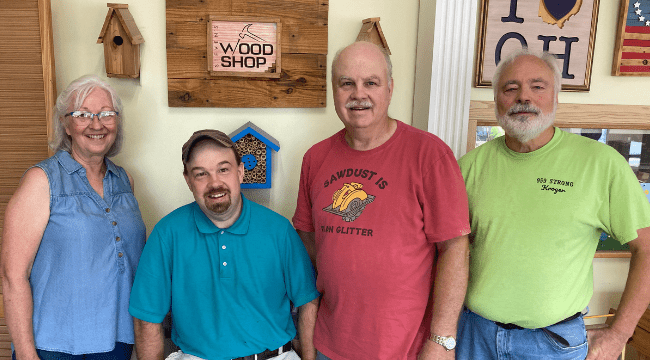 Steven, who is now the CEO of his very own woodshop located within Midd Town Cabinets in Middletown, has never let his disability stand in the way of doing what he loves to do. Steven was born with a part of his brain missing which eventually led to frequent seizures. Although Steven is non-verbal and deals with cognitive disabilities daily, according to his mother, Gail Webster, he hasn’t allowed that to stop him from living out his ultimate passion; woodworking.

Steven did not find his passion for creating beautiful objects out of wood until he finished the Project Life program, “a comprehensive, multi-year transition program in which students develop, practice, and strengthen skills that are high predictors of increased adult independence and successful, integrated employment in the community,” at Butler Tech, and even then Gail and Steven’s job coach had to work really hard to find what he was most passionate about.

“I knew Steven needed to fill his time with something he loved to do, but just wasn’t sure what exactly that would be,” Gail said. “Steven’s job coach after he got out of school took him around to many places and did the discovery process trying to locate something Steven liked to do that he connected with,” Gail explained. “We wanted to find what his interests were, what his passions were, and what his strengths were. We looked at truck washes, tractor sales, and sports places, all things that held an interest for Steven.”

Finally, Steven landed a job at the Fields Sports Arena located in Monroe where he vacuumed the indoor soccer fields with a large industrial vacuum cleaner. “Any big loud machinery is what he likes,” Gail said with a smile. Shortly after that, Steven got a job at One Stop Rental where he is still happily working today.

Although Steven enjoyed his job opportunities Gail and Steven’s job coach knew that Steven had another passion inside of him, they just had to figure out what that was.

“The job coach asked well what does Steven like to do when he has a little extra time and I said well one thing he really likes is to hammer,” Gail said, “he’s loved to hammer his entire life. When he was little he probably hammered through half a dozen hammer toys and then when he got a little bit older we would bring in a big log and buy a box of nails and he would hammer the nails until the entire log was covered with nails!”

So what exactly kickstarted Steven’s Woodshop? Tune in to the video interview below featuring Gail Webster as she gives us a tour of Steven’s Woodshop and goes more in-depth about how Steven started his business!

Since 2010, when Steven’s Woodshop officially opened for business, Gail and Kevin, Steven’s parents, Bill Bench, who works side by side with Steven at the woodshop, and Mike Valdini, Steven’s 9th grade Special Education Teacher, have taken several steps toward making Steven’s woodworking passion more accessible. With Steven being non-verbal both Gail and Valdini decided to create picture books and a “Steven’s Woodshop How-To Guide” to help Steven effectively communicate with others and build his custom wood items.

Gail came up with the photo book idea after brainstorming how she could help Steven communicate with others about his personal life. Gail wanted Steven to have a physical copy of all the amazing things that he was experiencing in his life so that he could then share those memories with others and reminisce any time he wanted to! Shortly after Gail created the first photo book she knew that this would be something she would continue for the remainder of Steven’s life.

“Steven takes his photo book with him everywhere and takes it out to show others and to look at himself every day,” Gail said. “Putting a photo album together with text next to each photo or collection of photos has really shown to be an effective way for Steven to communicate. I think at this point I have made over a dozen photo books. Once one photo book starts to get full I create another one.”

“Photos are something Steven has always enjoyed so I thought why not try to put a photo book together of all the major events and milestones in Steven’s life so he could share it with others.” she said. “I believe in celebrating Steven’s disability rather than being distraught about it all the time and so I thought with this photo book we could allow Steven to celebrate his life with others.”

Watch the video below of Gail explaining why the photo book is such an important part of how Steven communicates!

Gail isn’t the only one that has created tools that Steven can use to communicate and create beautiful wooden custom pieces; both his dad and Valdini also established effective ways to ensure Steven can successfully do what he loves to do.

Once Steven discovered his passion for hammering and creating, Valdini decided to create a “Steven’s Woodshop” manual that not only lists step-by-step directions and photo diagrams on how to properly execute each woodworking project but is customized to what Steven’s responsibilities are for each project!

Steven’s dad, Kevin, piggybacked off Valdini’s incredible homemade manual and began making “jigs,” which are devices that hold a piece of work and guide the tools operating on it. Using both the manual and jigs daily, Steven has been able to exceed all expectations and gain a well-deserved sense of independence.

Watch the video below featuring Steven in woodworking action as well as Steven’s dad, Kevin showing how to use use a jig!

The success of Steven’s Woodshop and the progress Steven has made despite his disabilities has not only made Steven’s parents proud but also those that help Steven daily at the woodshop. Gail said at this point the sky is the limit for Steven and his business as they are continuing to get more and more orders every day including special custom items.

“As more people hear about what Steven is doing we have been getting orders for wood items that people have found online such as Pinterest,” Gail explained, “This has created some positive challenges for Steven but has also made those helping him use their own creative abilities.”

Steven’s Woodshop specializes in wishing wells, bee houses, bird houses, bat houses, trash holders, end tables, serving trays, planters, wall racks, and much more! “If you don’t see it on our website or in the woodshop that doesn’t mean we can’t make it,” Kevin said, “We have had many people send us photos of custom items and we love the challenge!”